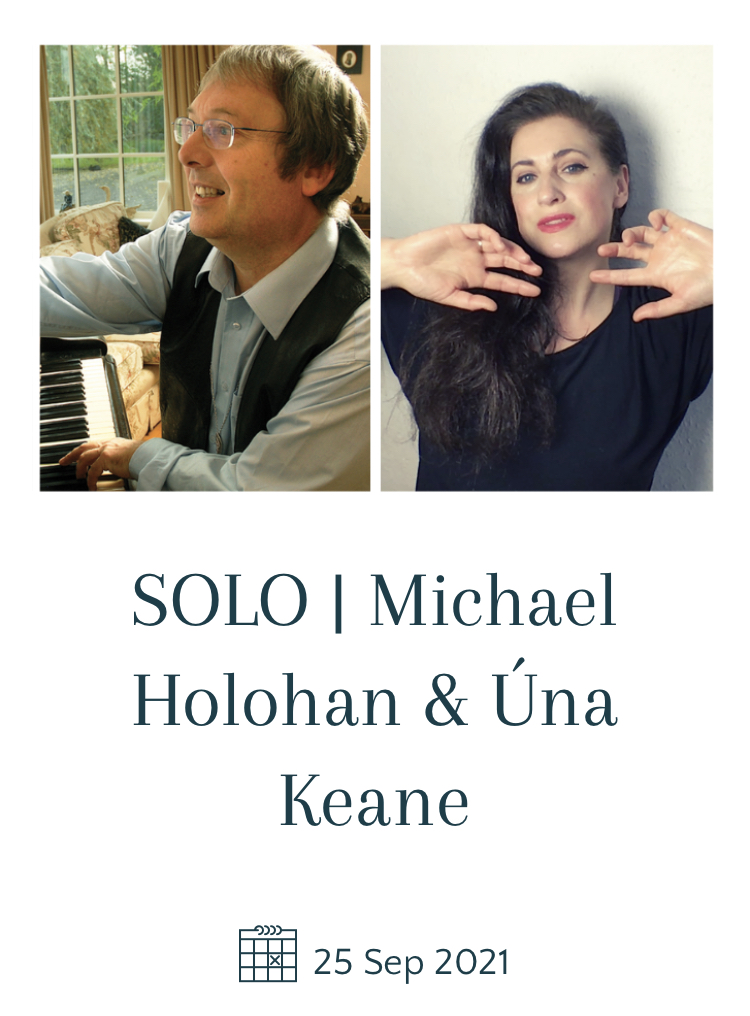 SOLO, curated by SJ McArdle, is an intimate concert series which Droichead has produced in various guises, and has seen performances from Maria Doyle Kennedy, Niamh Regan, Ollie Cole, Niamh Parsons and many more. Over the past two years, the series has moved online, but now we are delighted to bring it back in front of a live audience. “SOLO: Home from Home” will take place over four Saturdays in September in the theatre at Droichead. Each week’s show will feature two artists, making a total of eight engaging performances from some of the most innovative artists in Ireland today.

The composer and pianist Michael Holohan has resided in Drogheda since 1983. He has won numerous prizes as well as Arts Council awards to attend master classes, in the 1980s, with Messiaen, Boulez, Xenakis, Berio and Lachenmann in France. His compositions have been performed and broadcast both at home and internationally. Career highlights in Drogheda include Cromwell 1994, ‘Drogheda 800’ (RTECO, Lourdes Church); The Mass of Fire 1995, ‘Augustinian 700’ (RTÉ TV live broadcast); No Sanctuary 1997 with Nobel Laureate and poet Seamus Heanery (Augustinian Church); plus many more. He is a founding member and former chairman of the Droichead Arts Centre and a former chairman of the Association of Irish Composers. In 1999 he was elected to Aosdána, Ireland’s state-sponsored academy of creative artists, and recently served as chair of the Toscaireacht.

Returning to SOLO after performing in 2020, Ambient Neoclassical Pianist / Composer Úna Keane mines deep. A classically trained pianist with a background in Tech, her work lives + breathes in a unique, multi-disciplinary space incorporating piano, electronics, movement & film. The Dubliner released critically-acclaimed Live Album ‘Collaborations’ at the end of 2020. Named Irish Album of the Year by Broadsheet.ie, it garnered a glowing 8.5/10 review from Hot Press and 4 stars from The Irish Times. It features work from her last 2 LPs, as well as some new work and in-the-flow improv. Lauren Murphy, reviewing for The Irish Times has drawn comparisons to the work of Ólafur Arnalds and Max Richter, citing her use of looped tracks and field recordings. Of her work over the past few years, Tony Clayton-Lea has named her “probably one of the best exponents of instrumental music that comes from a quiet, calm place”.

SJ McArdle is an Irish songwriter and musician, Artist in Association at Droichead Arts Centre and is known for his work in contemporary Irish folk band Kern from 2013 to 2020. More recently, as a solo artist, SJ has been working on a project called Port, a song-cycle based around research into the stories of Drogheda’s historic Port, produced in association with Droichead, and an album is on the way. His songs and performances have been featured in radio, film and television and he has toured extensively, nationally and internationally over the past twenty years.

All shows must be booked in advance, there is limited capacity of 41 seats available. Tickets are sold in pods of 2, 3, and sometimes 4, with every second row empty, and adhering to social distancing of 2m, for more details on our Covid protocols click HERE. Masks are required at all times in the venue. Your email ticket will include full details of your visit to Droichead during this time.